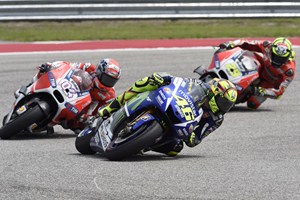 MOVISTAR Yamaha MotoGP rider Valentino Rossi finished third in the second MotoGP round of 2015 in Austin despite a front tyre issue.

The Italian started from fourth on the grid and quickly moved up into third ready to fight for the lead with Marc Marquez and leading man Andrea Dovizoso.

It wasn’t long until Marquez had regained the lead pulled out an advantage leaving Dovizioso and Rossi to duel.

The nine-time World Champion and his Italian rival Dovizioso swapped places several times fighting for second place, but Rossi managed to make it stick and tried to hunt down race leader Marquez.

However, Rossi was unable to close the gap and was then involved in a second battle with Dovizioso, six laps from the end.

Rossi continued to push, but was dropping off the pace ever so slightly due to a worn out front tyre. He crossed the line in third place, just over three second behind race winner Marquez.

“I’m happy about the weekend, because getting onto the podium is a good objective when coming here,” explained Rossi.

“On paper this track is the worst for our bike. I am satisfied about the weekend as a whole because we were always in the top 4-5 and we also weren’t so bad on the wet.

“For it to be perfect I would have had to beat Dovizioso, but unfortunately he was a bit faster. I didn’t have a chance to try, also because after six or seven laps of pushing a lot, I had to ride very smooth.

“For some reason our bike destroyed the front tyre. It’s been like this in 2013 and last year, but this year, fortunately, Bridgestone brought a harder front. That helped me to arrive at the end of the race, but the tyre was still damaged.”

Speaking about the battle with Dovizioso, Rossi said: “Dovi said to me that we risked a lot overtaking in turn 12. From the bike I didn’t feel it and I thought we had some margin. We passed each other very closely, but there was enough space.”

MotoGP 2015: Qatar race results
Dovizioso: ‘I would never team up with Rossi’
Rossi: ‘It was one of the best races of my career’
Rossi to star at Goodwood Festival of Speed
Rossi: ‘The only negative thing was the speed of Marc and Dani’