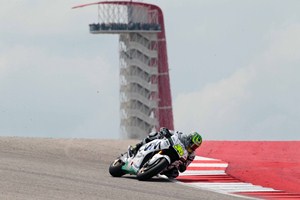 CWM LCR Honda rider Cal Crutchlow finished seventh at the Circuit of The America’s yesterday but was overall disappointed after losing nearly five-seconds.

Unfortunately, the Brit was caught up in first-lap collision between Scott Redding and Pol Espargaro. This incident cost Crutchlow valuable seconds at the start of the race and was unable to recover despite starting from fifth on the grid.

Crutchlow finished just under 17 seconds behind race winner Marc Marquez, but was left frustrated with this result knowing that he and the team had made very good progress throughout the course of the weekend.

Speaking after the race in Austin, Crutchlow explained: “Today I was really disappointed with the result. We had a good pace over the race weekend.

“In the race itself we had some problems, I got caught up in the crash on the first lap and lost nearly five-seconds in one lap and from that point it was very difficult to catch up.

“The whole CWM LCR Honda team need to regroup now and come back to the next race stronger as we were too far behind the winner today. We need to discuss a plan for Argentina which is a track I have never raced at before, but I am looking forward to it.”

The next round takes place on 19th April in Argentina at the Termas de Rio Hondo circuit.

Crutchlow: ‘I’m really rusty from the winter off’
Crutchlow: ‘RC213V more physically demanding’
Crutchlow confirmed with LCR Honda for 2015
Crutchlow to leave Ducati at the end of 2014
Miller to join LCR Honda in MotoGP